The American actress turned singer AJ Michalka is now on the trending list. She took ten years long break and came back in the music industry. Her fans and followers suspected something might have happened in her personal life. As she is charming and gorgeous, it is not rare to find people’s desire for her. But what most of her fans want to know is whether AJ is dating some guy or not?

The recent reports show that she is in a romantic relationship with her boyfriend; but is it true? Today we will be uncovering every piece of facts and give you the answer!

Is AJ Michalka Dating Someone? Who’s Her Boyfriend?

AJ is pretty secretive about her personal life, so most of her information is omitted from media. But, as per the reports, and some thorough investigation; we found out that AJ might be romantically linked with her alleged boyfriend.

As mentioned in J-14, AJ was linked with Keenan Tracey and enjoying their dating life together. We also found a picture of Just Jared Jr., where we can see both kissing each other. The image was on 25th October 2014. 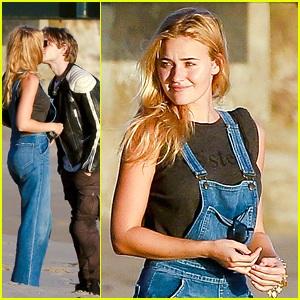 Another picture of both came out when Aly, AJ’s sister posted a photo on her Twitter account of the Halloween party. She captioned:

All of the above were from past, and there was also a news of both being separated. But, from their recent actions, we think both are into a secret dating relationship. Here is a picture of both shared by AJ on 13th of May this year. She captioned:

‘7 years of knowing this guy. Here’s to 8 🍾 #thankfulforyou’

But things also got confused when we saw a picture of Keenan with red roses along with an actress Priscilla Quintana.

Well, everything would have been clear if they spoke about their dating life. Wish they do it soon!

In the year 2011, AJ was romantically linked with her boyfriend, Harrison. There is no much of information of the pair, but it was reported that both decided to split just after a year.

Caption: AJ Michalka with Harrison walking down the street.

A year before meeting Harrison, AJ was dating Ryan Blair, who is one of the best American authors and an entrepreneur. The duo was together for almost a year. Their love bloomed in 2010.