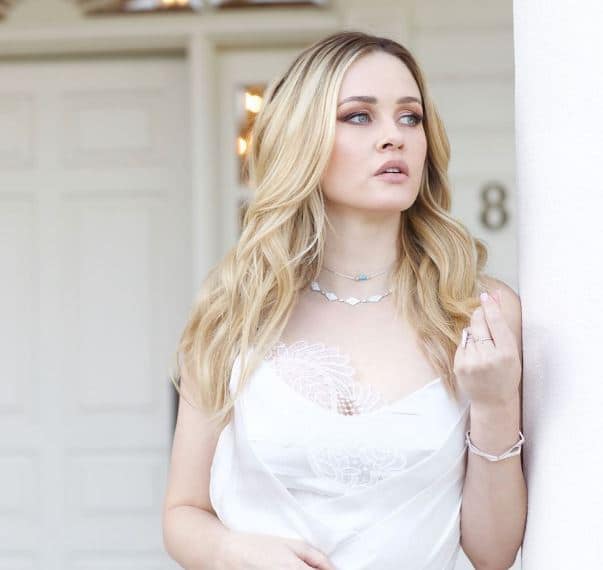 Ambyr Childers is an actress most known for her TV presence. She is famous for her prominent roles in the NBC crime series, Aquarius and Lifetime/Netflix thriller series You. Besides, the actress also came into the spotlight from her marriage and the drama that came with it. Learn more on Ambyr Childers’s marriage, and why did she divorce from her first husband.

Ambyr Childres is popular as an actress, a role she brilliantly played on the soap opera All My Children from 2006-2008. Likewise, she also played the role of Ashley Rucker from 2013-2016 in Ray Donovan. Besides, the actress also starred as Sadie on the series Aquarius and Candace Stone in You.

Moreover, Ambyr also has appeared in several movies after making her big-screen debut in 2003 in the movie Carolina. Since then, she has appeared in Love, All Things Fall Apart, Setup. Freelancers, The Master, Broken City, 2 Guns, Vice, and Pinocchio. As of 2020, Ambyr Childers has a net worth of $5 million.

Ambyr was firstly hitched to her husband, Randall Emmett, who is best known for his work as a TV producer. Likewise, the couple planned to take their relationship to the next level, and thus, Ambyr and Randall tied the knot in 2009. Likewise, the couple became parts to their first child, a daughter named Thea Emmett, on February 2, 2010. Later, they introduced a second daughter, Rylee Emmett, in November 2013. Despite living as a happy family of four, the crack started appearing in their marriage in 2015, when unconfirmed rumors of Ambyr’s husband dating Vanderpump Rules star Lala Kent surfaced.

Moreover, it was clear that the couple could no longer be together when they filed for a divorce, which was finalized on December 27, 2017. A few days after the divorce, Ambyr’s now ex-husband made his relationship with Lala Kent public on New Year’s Day 2018. Moreover, Ambyr also announced that she was engaged to businessman Jeff Tinsley, CEO of MyLife.com, the same month. As people were shocked of the couple moving too soon from their relationship, Lala later confirmed that Ambyr and Randall were separated long before the news was made public. Besides, Randall and Lala were engaged in September 2018 and tied the knot on April 18, 2019. Ambyr, on the other hand, has not confirmed the day of the wedding ceremony, but she seems happy with her newfound love as she often posts romantic pictures with her fiancé.

Ambyr C. Childers was born in 1988 in Cottonwood, Arizona, United States. She celebrates her birthday on July 18, which makes her age 31. Ambyr has not revealed the identity of her parents and two sisters. She attended Vista Murrieta High School.

The actress, Ambyr, holds an American nationality and comes from White ethnicity. The actress has a height of 5 feet and four inches.