Brendan Taylor is one of the most popular Zimbabwean international cricketers who holds the most number of ODI centuries for Zimbabwe, 10 ODI hundreds. Likewise, he is a right-handed batsman and also a part-time wicketkeeper and off-spinner. He captained Zimbabwe in ODI until 2015. In November 2018, he became the first batsman for Zimbabwe to score a century in each innings in a Test on two separate occasions.

As a cricketer, Brendan made his debut in a match against Sri Lanka. Despite lacking impressive performance, he made an outstanding impression with the knock of 74 in the final game. His international career shined after his 60 not out helped Zimbabwe achieve five wickets against Australia in the 2007 ICC World Twenty 20th. 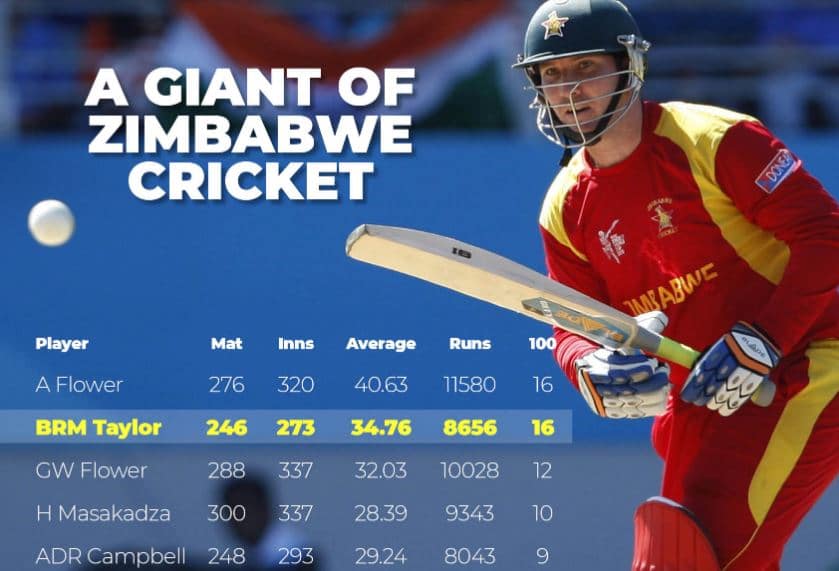 Likewise, in Cricket World Cup 2015, he scored two back to back centuries, the first one against Ireland and the second against India. Besides, he made his domestic debut in December 2003 for Mashonaland. He moved to different trams like Northerns, Mid West Rhinos, Uthura Oryxes, Chittagong Kings, and Khulna Titans before finally landing on Lahore Qalandars in 2019. As of 2020, Brendan Taylor has a net worth of $5 Million.

Brendan is very private when it comes to sharing information on his wife and children. However, it is known that he is married to his beautiful wife, Kelly Anne Readings. Likewise, it is not known how the couple started dating or when they tied the knot. Besides, with his wife, he shares four adorable children.

Nonetheless, his wife once made headlines when the news of her being robbed spread the news. Brendan took twitter to share the scary story of his wife being mugged. He tweeted,

Just had an alarming situation outside my house,” Taylor wrote.

“I was waiting for my wife’s return in my driveway. I started hearing her screaming about 100m from my gate, she was getting mugged by 4 armed men. I ran outside and they sped away in red Honda Fit.”

“Fortunately she only lost her handbag and it could of been a lot worse. People are getting desperate, be vigilant when entering your property and try keep off the roads after dark. With all this load shedding we’re easy targets.”, he added.

Brendan Ross Murray Taylor was born in 1986 in Harare, Zimbabwe. He celebrates his birthday on 6th February, which makes his age 34. Likewise, he was raised by his parents, Graham Taylor and Debbie Taylor. He graduated from Lilforidia School

He holds Zimbabwean nationality and mixed ethnicity. He has a tall height of 6 feet and 5 inches.