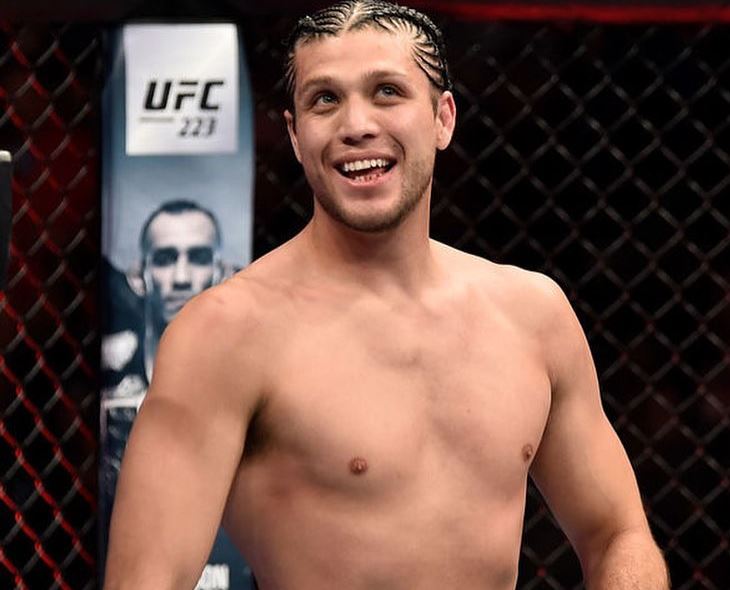 Brian Martin Ortega is a successful American mixed martial artist. Currently, he is the number one contestant in the featherweight division of the Ultimate Fighting Championship (UFC). On 25 February 2019, he was ranked #2 in the official UFC featherweight rankings. He is the only fighter ever to knock out Frankie Edgar in the first round.

Brian signed with UFC in April 2014 and made his debut against Diego Brandao at the Ultimate Fighter Brazil 3. Later, he was pulled out due to injury. And he made his official debut against Mike De La Torre at UFC event on 26th July 2014.

He fought against Clay Guida and won through KO in the third round at UFC 199. On 29th July 2017, he fought against Renato Moicano at UFC 214, where he was victorious through a  submission hold.

He was scheduled to bout against Max Holloway for the Feather Championship at UFC 226 on 7th July 2018. But Holloway pulled out of the fight because of “concussion-like symptoms.” However, Brian suffered his first ever UFC loss against Max Holloway on 8th December 2018. His net worth dwells around $1.2 Million.

Brian is possibly single at present. Through various social media posts, he has even mentioned that he doesn’t have a girlfriend. Recently, he was rumored to be dating Halle Berry, an American actress. But he cleared the rumors claiming that the two were together for training to get her ready for the movie, Bruised.

For now, Brian is single and focused on his upcoming games. Hopefully, he’ll meet the love of his life soon.

Brian Ortega was born in San Pedro, Los Angeles, California on February 21, 1991. His parents used to live in Hermosillo, Sonora, Mexico. He grew up with his two sisters and a brother. He began to learn martial arts at the age of five. When he turned 13, he started training Brazilian jiu-jitsu at the Gracie Jiu-Jitsu Academy. Later, he began his fighting career with the regional MMA promotions of Southern California.

Brian has a decent height of 5 feet 8 inches. He has long brown hair and light blue eyes.