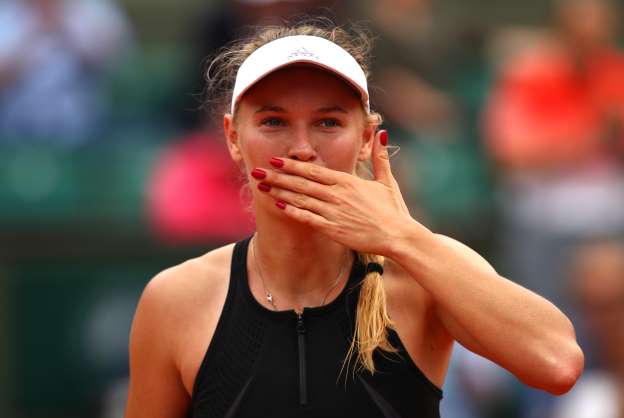 Caroline Wozniacki is a Danish tennis player and a former world no. 1 in singles. She is the first woman from a Scandinavian Country to secure the top ranking position and 20th position on overall. She has already won 30 WTA singles titles, including six in 2010 and 2011, the most in a year by a WTA player from 2008–2011. Also, she became the only 4th player in WTA history to surpass $32,538,413 as prize earnings.

Caroline is happily married to her husband, David Lee. The two got married on June 15, 2019, in an intimate wedding ceremony held at Castiglion del Bosco in Italy.

David proposed Caroline in Bora Bora with an 8.88-carat diamond engagement ring, where 8 is her lucky number. The duo got engaged on November 02, 2017.

The couple first met each other in Miami in December 2015. Eventually, they started dating but kept the whole thing a secret. Their relationship was confirmed after Caroline shared a snap chat story on Valentines Day 2016, tagging her boyfriend, David.

Caroline began playing tennis at the age of 7. She won the Osaka Mayor’s Cup single title in 2004. She won other junior events, including the 2005 Orange Bowl and the 2006 Wimbledon girls’ singles title. At the 2009 U.S. Open, she made it to the women’s singles final, before losing to Kim Clijsters.

At the 2017 WTA Finals, Caroline beat Elina Svitolina for the first time after losing to her twice in finals, in straight sets. She got the world No. 1 ranking on 29 January 2018 after winning her first grand slam title.

Her net worth dwells around $30 Million.

Caroline Wozniacki was born in Odense, Denmark, on July 11, 1990, which makes hs age 28. She is the daughter of Piotr Woźniacki and Anna Woźniacka, and she possesses Polish ethnicity. She showed her interest in the world of tennis since her childhood days. Her older brother named Patrik Wozniacki is a former professional footballer in Denmark. She went to Marie Kruse’s School.

Caroline has a decent height of 5 feet 8 inches. She weighs about 58 kg.