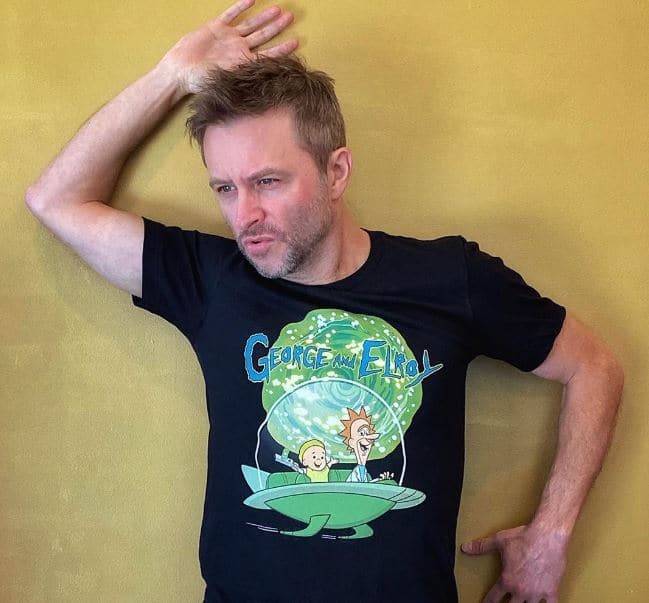 Chris Hardwick is a well-known personality in the entertainment industry with a career as a TV host, writer, producer, podcaster, comedian, and actor. He is known for hosting the popular podcast Talking Dead and creating Nerdist Industries. However, his career came down when he was alleged for sexual harassment from his ex-girlfriend.

Learn more on Chris Hardwick and get to know more on his career, net worth, wife, and much more.

Chris’s career has a host started when he was hired to host for Trashed on MTV in 1993. He later hosted a show called Singled Out from 1995-1998, which brought him attention. Likewise, he also started performing comedy regularly, and in 2010, his career reached new heights when he launched The Nerdiest Podcast. It helped him launch an empire of a production studio, TV shows, and more.

Moreover, in 2011, he started hosting Talking, which discussed the show Walking Dead. In 2012, Legendary pictures purchased Nerdiest Industries in an undisclosed sum. Furthermore, Chris also hosted the Comedy Central game show @midnight with Chris Hardwick. The show aired for 600 episodes. He has also appeared in tons of movies such as Spectres, The Life Coach, Halloween II, Extremely Loud & Incredibly Close, and My Brother Peter! among others. As of 2020, Chris Hardwick holds a net worth of $15 million.

Chris is married to his beautiful wife, Lydia Hearst. His wife is a model, blogger, heiress, and actress. He was engaged to Lydia on September 12, 2015, after being together in 2014. The two lovebirds tied the knot on August 20, 2016, at the luxury resort, “The Langham Huntington,” in Pasadena, California. The couple has had a loving relationship, and Chris often takes time to appreciate his beautiful wife on his social media.

Before meeting his wife, Chris was previously engaged to Jacinda Barrett and was dating Andrea Savage and Janet Varney. Moreover, his relationship with Chloe Dykstra made headlines when they were dating from 2011 to July 2014. Their relationship seeded controversy when Chloe published an essay in which she alleged that she was emotionally and sexually abused. Although she did not mention the name, her words hinted to be Chris, which brought chaos in his career. However, TMZ revealed a message of the breakup which revealed that Chloe had been cheating on Chris with a guy named Sam, and the allegation charges were dropped.

Christopher Ryan Hardwick was born in 1971 in Louisville, Kentucky. He celebrates his birthday on November 23, which makes his age 48. He was one of two sons of his parents Billy Hardwick and Sharon Hills. His brother was named Eddie Hardwick. The comedian attended St. Benedict at Auburndale and later moved to Regis Jesuit High School. He completed his senior last year at Loyola High School and graduated from UCLA in philosophy in 1993.

Chris Hardwickholds an American nationality and comes from a mixed ethnicity. The actor has a height of 5 feet and 10 inches.