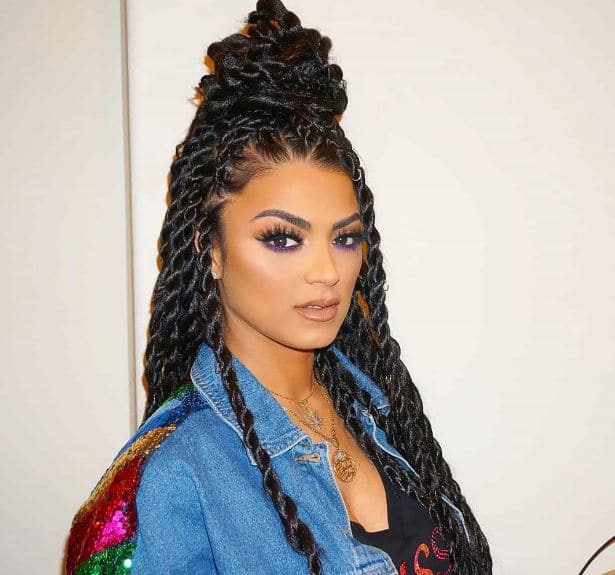 Golnesa Gharachedaghi is an American reality T.V. star who came into prominence after appearing in the Bravo’s hit T.V. series, Shahs of Sunset. Besides, she is also an entrepreneur and an Instagram influencer. She has founded many business ventures, including Wüsah, a Cannabis Wellness Brand, and RoGo Farms. However, the start is currently making headlines after she reveals the gender of her baby through a baby shower.

Golnesa is most famous as a T.V. star and earned popularity after appearing in the T.V. show, Shahs of Sunset. The show features the captivating lives of six young Persians-American who navigates through life in Beverly Hills. Besides, she had also made an appearance in other T.V. shows like The Jeff Probst Show, Watch What Happens Live with Andy Cohen, and Bethenny.

Besides, she is also a self-professed fashion diva and began designing a collection of couture. She went into business with her sister to start G.G.’s Extensions, which offers a variety of premium synthetic and human hair extensions. As of 2020, Golnesa has a net worth of $12 million. Regardless, she still receives financial support from her father and has often bragged on how she receives $7,000 per month from her dad as a monthly allowance.

Golnesa is single at the moment and has no significant one. However, her relationship last made headlines when she married her ex-husband Shalom Yeroushalmi. After tying the knot in January of 2017, Golnesa and her then-husband called it quits after five weeks of marriage. It might have been the shortest celebrity marriages in history at the time, and her story went wildfire on the internet. When asked the reason for the split, Golnesa rep replied,

‘During the past few weeks, certain facts have come to GG’s attention that have made her realize her marriage can no longer continue, and, in fact, should never have happened.’

‘She is hoping to end the relationship as amicably and respectfully as possible.

Likewise, Golnesa shared that she and her husband married on the spur of the moment. The two-headed to a nearby alter to share their vows after receiving their paperwork for their marriage license.

“An hour later, we walked out of that chapel as husband & wife. We clearly weren’t dressed for it and I couldn’t stop laughing from shock… but f*** it… we’re not like ordinary people.’

Moreover, she had also shared a picture on the occasion of Valentine’s Day which read,

‘This was the day you proposed… it was 13 degrees in NYC, we barely had enough clothes on, my tears kept freezing down my face, you pulled off the sweetest surprise proposal and with the most beautiful ring. I’ll never forget that day!’

Golnesa now seems to be single and has no partner at the moment after her divorce in late 2018.

“Honestly, since I was little, I have been in love with Elijah Wood,”

Besides, her upcoming baby’s name also pays tribute to her sperm donor, who is Jewish.

Golnesa was born in 1981 in Los Angeles, California. She celebrates her birthday on November 27, which makes her age 38. She was born to her father, Mahmoud Gharachedaghi, who operates one of the most successful boutique architecture firms on the West Coast. Likewise, her mother also holds a job in the textile and garment industry. Her parents came to the United States in Iran in 1975. Besides, she also has an older sister who is an entrepreneur and runs several businesses from real estate to fashion.

The T.V. star was a gymnast during her high school days and graduated from Loyola Marymount University in Los Angeles and also holds a certificate in addiction treatment counseling. Golnesa Gharachedaghi holds an American nationality and comes from Iranian descent. Golnesa has a height of 5 feet and 9 inches.