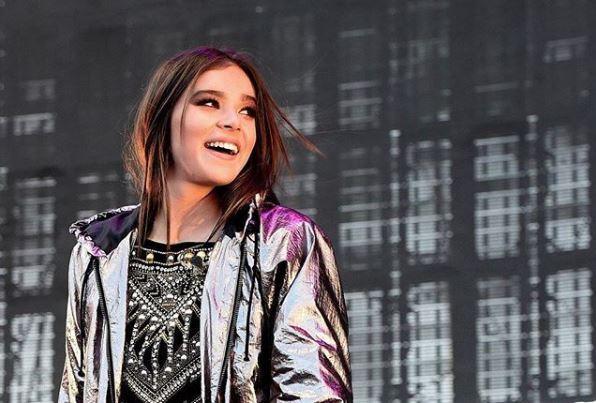 American actress Hailee Steinfeld is famous for her Oscar-nominated performance as Mattie Ross in the 2010’s movie True Grit. Lately, she gained lots of attraction from her roles as Charlie Watson in “Bumblebee” and Spider-Woman ‘Gwen Stacy’ in “Spider-Man: Into the Spider-Verse.” She is also a multi-platinum recording pop artist. Recently, Drax Project teamed up with her and dropped a new single, “Woke Up Late” for the band.

Steinfeld began her career in the acting field at the age of eight, appearing in several short films. When she turned 13, she played a role of Mattie Ross in the movie “True Grit” in 2010. Her performance received global acclaim along with a nomination for Best Supporting Actress at the 83rd Academy Awards. She then became a new face of Italian designer brand Miu Miu.

Steinfeld appeared in several movies and TV series, including Begin Again, 3 Days to Kill, Ender’s Game, Back to You, and Summer Camp. She also sang a song called “Flashlight” in Pitch Perfect 2. Her recent single Love Myself has been doing excellent business, taking her popularity to another level.

Her performance in the film ‘Edge of Seventeen‘ gained lots of positive reviews from the critics and earned her a Golden Globe Nomination. She released her music single ‘Most Girls‘ on 28 April 2017. She has a reported net worth of $8 million.

Hailee is currently dating her alleged boyfriend, Niall Horan. He is a songwriter, singer and former One Direction member. They sparked dating rumors in February 2018 when fans caught their romance. Recently, Steinfeld also talked about being in love with someone but didn’t mention the name of the lucky man. Both the alleged pair has yet to confirm their relationship to the public.

Caption: Hailee Steinfeld and her alleged boyfriend, Niall Horan sealed their romance with a kiss amid the sparkling dating rumors. Photo credit: eOnline

Hailee Steinfeld was born in California, USA on 11 December 1996, making her current age 22. Her birth sign is Sagittarius. She was born to her parents – Peter and Cheri Steinfeld. Her father, Peter is a personal fitness trainer while her mother, Cheri is an interior designer. She grew up with an older brother, Griffin.

Steinfeld attended Colina Middle School for her schooling. She completed her high education in June 2015. She has mixed ethnic background (Jewish from her father’s side and half Filipino and half African-American from mother).

Steinfeld stands tall as she has a decent height of 5 feet 8 inches. She has brown eyes and hair.