A footballer turned entertainer, Howie Long had a marvelous career as a footballer playing for the Raiders. He had earned titles such as NFL Defensive Player of the Year and NFL 1980’s All-Decade Team. However, after retiring, he started a career in the entertainment business, where he earned success and also became a sports analyst.

Initially, Howie wanted to become a football player, and his professional NFL career started when he was selected in the second round of the 1981 NFL Draft by the Oakland Raiders. The Raider played 13 seasons for the club, wearing number 75. Serving as the defensive end, he earned eight Pro Bowl selections. Howie was also named first-team All-Pro three times in 1983, 1984, and 1985 and second-team All-Pro twice in 1986 and 1989. He was famous for his signature defensive move, rip, which was a quick, uppercut-like motion designed to break an opposing blocker’s grip.

After retiring from NFL in 1993, he pursued an acting career focusing on action films. He made his debut in “In’N Out” in 1984 and later appeared in Broken Arrow, Dollar for the Dead, and 3000 Miles to Graceland. He was also featured in commercials for Nike, Hanes, Frito Lay, Coca-Cola and Pepsi, Pizza Hut, Honda, and Chevrolet. Later, he also became the studio analyst for the Fox Network’s NFL coverage and wrote columns for Foxsports.com. Furthermore, she also wrote the book Football for Dummies. As of 2020, Howie Long possesses a net worth of $16 Million. Also, he earns an annual salary of $4 Million.

Howie Long is married to his long-time girlfriend, Diane Addonizio. The couple met each other during their college days, as both of them attended the same Villanova University. Upon graduation, Howie had not taken his relationship to the next level but instead focused on his NFL career. However, after turning pro, he focused more on his relationship and married her then-girlfriend in June of 1982. 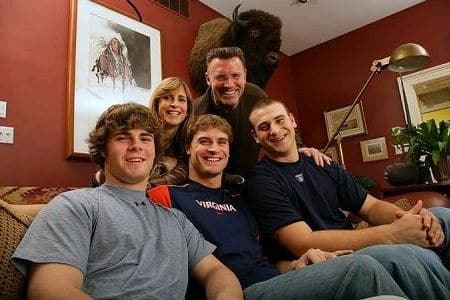 The couple has spent more than decades as husband and wife, and their love seems unbreakable. From his marriage, Howie also fathered three sons, introducing his first son, Christopher Howard Long, on March 28, 1985. Christopher followed his father’s footsteps and played as the defensive end for the Philadelphia Eagles of the NFL. Likewise, his second son, Kyle Howard Long, was born on December 5, 1988, and he too pursued a career in football, playing as a guard for the Chicago Bears.

Nonetheless, his youngest son, Howard Long Jr., was born in 1990. His youngest son took a different career path and worked as a scouting assistant and personal assistant for the Raiders. Howie Long lives comfortably with his wife, and there are no rumors of them splitting up anytime soon.

Howard Matthew Moses Long was born in 1960 in Somerville, Massachusetts. He celebrates her birthday on January 6, which makes his age 60. His parents, Margaret and Howard, divorced when he was still a child. Besides, his mother had epilepsy so he grew up living with his grandmother.

He attended Milford High School and is a member of Milford Hall of Fame. He was an all-round athlete and played football, basketball, and track. The former footballer, Howie, holds an American nationality and comes from White ethnicity. The actor has a height of 6 feet and 4 inches and weighs around 122 kg.