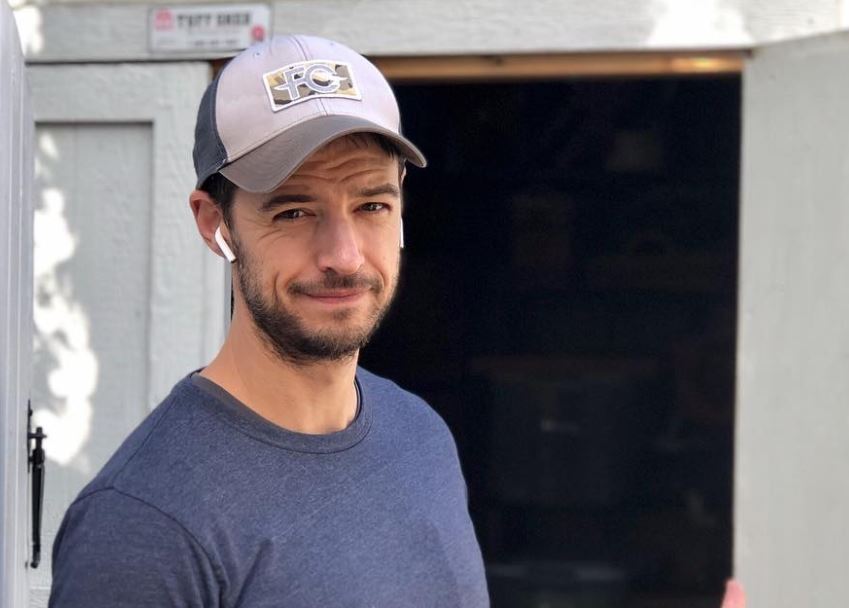 Joshua Snyder is an American actor popular for his acclaimed 2005’s movie Shopgirl. Besides being an actor, he is a baker and YouTuber who runs a baking channel called ‘Baking With Josh & Ange’ with his lovely wife. He is married to an American actress, Angela Kinsey. With the cooperation and respect from their children, he nourished his relationship with his wife.

Joshua is married to his wife, Angela Kinsey, whom he met through their kids. His sons, Cade and Jack, and Angela’s daughter, Isabel Ruby Lieberstein, were the childhood friends, who knew each other since their preschool. He shifted to Angela’s location and became her neighbor. The couple met each other in a grocery store and became neighbor friends. Eventually, they started dating after maintaining their friendship.

On 4th August 2016, Angela confirmed her engagement with Joshua with a throwback picture on her Instagram, where she flaunted her green emerald ring with a bouquet of white roses. Three months later, they got married in Topanga, California in front of their kids and close friends on 13 November 2016. Nearly 130 guests attended their wedding and enjoyed the family-style feast.

Joshua has two sons from his previous relationship, and his wife, Angela, has a daughter from her previous relationship. In July 2018, the family of five attended Joshua’s sister wedding in Oregon. Their kids often appear on their YouTube channel, ‘Baking With Josh & Ange.’

Joshua has appeared in movies like Shopgirl, General Hospital: Night Shift, and Laid in America. He has also starred in TV shows like Without a Trace, Criminal Minds: Beyond Borders, and Miss Dial. However, Joshua rose to fame after featuring in the CSI: NY, where Lela Loren and Meghan Markle also made their appearance. He also acted in the 2010 comedy Hard Breakers and the long-run saga Days of Our Lives.

As a baking duo, Joshua and his wife, Angela, run a YouTube channel called ‘Baking With Josh & Ange,’ where they share their baking experience. The channel has already amassed over 82k subscribers with more than 2 million views.

Joshua earns a decent income from his YouTube channel and acting career. His net worth dwells around $750 Thousand, which is comparatively lower than his wife’s net worth. Angela’s net worth is estimated at $12 Million.

Joshua Snyder was born in the USA on November 11, 1977, which makes his age 41. He is the son of Lynne Synder, who is a healthcare counselor. Not much is known about his father. He has two sisters – Josi and Jori Snyder. He went to Northglenn High School and graduated from the University of Colorado Boulder.

Joshua has a tall height of 6 feet 1 inch.