A new scoop is at a peak right now. We always covered all celebrity news actively, but this time it is an admirer who made her name in the music industry as well. We are talking about songwriter and singer from Scottland, Lauren Mayberry who is also known being an admirer of Emma Watson. This time, she is at the peak because of her first love life. So do you have any guesses? Well, it is not that secret as the guy is Justin Long, who featured in the drama named Comet in 2014. The duo was seen together frequently since late 2016, and are enjoying their love life.

So today, we will be discussing Lauren Mayberry dating life with her boyfriend, Justin Long and also more of their relationship; stay with us!

Justin Long is the very first lovebird in her life. As mentioned in some sources, the pair started seeing each other beginning in November of 2016. The official statement of both came out in November, but we guess they were together for much longer. It is possible that they might have waited for long to have perfect opportunity to share the news with the world.

The mainstream magazine THE SUN mentioned:

‘Justin’s a Chvrches fanboy too. He loves following Lauren on tour and wears the band’s tees.’ 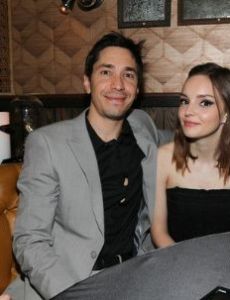 Caption: Lauren Mayberry and Justin Long Together in a restaurant.

We can also say that their relationship has gone far more profound than expected. The actor has already introduced her to his close friends and family members. Here is one statement from a source:

‘Justin and Lauren have been seeing each other for months but things are getting serious. He has introduced her to some of his family.’

As THE SUN mentions, the beautiful couple is currently living together in residence in New York; and it’s already near to one year of their love life. It’s not that far when we will be hearing her engagement announcement.

The duo loves visiting different places together. Here is one picture of both from @laurenevemay that she uploaded while visiting THE GIRLS HOME in Nicaragua.

Although this relationship is very first for Lauren, it’s not new for Justin. Before her, he dated Amanda Seyfried and four other ladies. As mentioned by Entertainment Online, the ex-couple hooked in the year 2013 and broke up in 2015.

Caption: Justin Long and Amanda Seyfried in an event.

The news of their split came out exclusively in E! Online in the month September. Before being in love life with Seyfried, he dated Drew Barrymore, Maggie Q, Kaitlin Doubleday and Kristen Dunst.