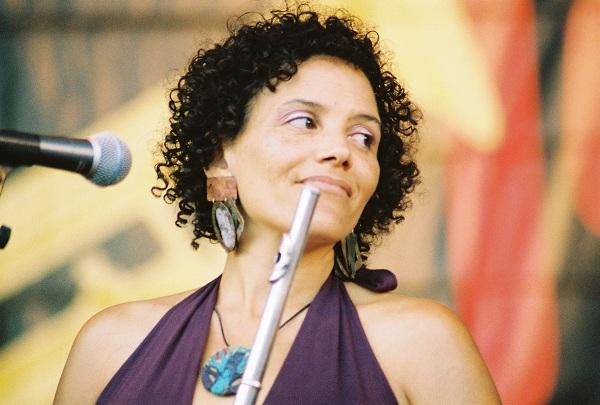 Nicole Mitchell, an excellent composer and singer, is also Black Earth Ensemble founder. It is tough to find another person as talented as her in the field of improvised music at present. She was honoured as the “Top Rising Star Flutist” by Downbeat Critics poll for seven consecutive years from 2005 to 2011.

Born in the late 60s, Mitchell has been part of the jazz and experimental music scene since the early 90s. Credited to Nicole Mitchel and the Black Earth Ensemble, she issued her first album in 2001 titled Vision Quest. Not just as a creator, she has also contributed a great deal in the field of jazz music as an educator.

Born on February 17, 1967, Nicole Mitchell grew up in Syracuse New York until she was eight years old. After that, she moved with her family to Anaheim, California. Mitchell started showing her musical talents from quite a young age. She started playing piano and viola in fourth grade. As a teenager, she followed her passion and went for classical training in flute. In her beginning days, she played in youth orchestra as an instrumentalist. She also showed interest in mathematics and intended to do a major in it. She studied jazz music under Jimmy Cheatham at University of California in San Diego.

In 1987, she transferred to Oberlin College and finally moved to Chicago in 1990. She started working for a publishing house called Third World Press. Nicole got introduced to the members of AACM who later became her mentors and collaborators. She started playing with Samana, the all-women ensemble. Samana was under AACM umbrella. One year after she moved to New Orleans, she returned to school in 1993. After meeting Hamid Drake in 1995 and working intensively with him for few years, she decided to start her group.

Saxophonist David Boykin, whom she had met in 1997 pushed her too by providing moral support. As a result, the critically acclaimed Black Earth Ensemble was formed. With the Black Earth Ensemble, she released her debut album entitled Vision Quest in the year 2001. She went further with the Ensemble and released her other albums like Afrika Rising, Hope, Future and Destiny, Black Unstoppable and Xenogenesis.

She started pretty early in her life as a flutist. She played jazz flute in the streets when she was a college student at University of California in San Diego. After she moved to Chicago in 1990, she was still playing in the streets until she met the members of AACM. She joined the all-women ensemble and played there until she left Chicago in 1992. As a featured soloist, Mitchell has performed with the Orbert Davis Chicago Jazz Philharmonic at the Auditorium Theater and Millennium Park in Chicago. On the occasion of the AACM’s 40th Anniversary, she played a special duo concert with pianist Muhal Richard Abrams in Chicago in December 2005. In Munich, Germany she performed with composer George E. Lewis and the International Composer’s and Improvisers Ensemble (2003).

Mitchel also had a humanitarian and egalitarian perspective she wanted to incorporate into her music. So she founded a multi-genre, multi-generational celebration of the African American cultural legacy called Black Earth Ensemble. Mitchell’s critically acclaimed CDs: Vision Quest (Dreamtime), Afrika Rising (Dreamtime), Hope, Future and Destiny (Dreamtime), Black Unstoppable (Delmark) and Xenogenesis (Firehouse 12) has led with the Black Earth Ensemble. Black Earth Strings, an acoustic quartet that has its expertise on African rhythms and contemporary sounds also have Mitchel as its bandleader.

Black Earth Orchestra was commissioned by Chicago’s Department of Cultural Affairs to premiere Many Paths to the Sea: A Tribute to Alice Coltrane in 2007. In 2009, Mitchell created “Honoring Grace: Michelle Obama.” was commissioned by the Jazz Institute of Chicago. In 2010, as the “Artist in Residence” at the Chicago Jazz Festival she premiered the “Arc of O” for large ensemble, music for flute and piano featuring herself and Anthony Davis and “Mother Nature Suite” for Black Earth Ensemble featuring harpist Edmar Castaneda.

Mitchell directed a project that showcased the talents of her daughter Aaya. The project was called Aya Sensation. She also directed a multi-generational; all woman ensemble projects entitled Tindanga Mama. Mitchell does not limit herself to her solo creations and has a great history of beautiful collaborations with various contemporary artists. She also performs with the Indigo Trio, the Exploding Star Orchestra, the Orbert Davis Jazz Philharmonic, the New Black Repertory Ensemble, the David Boykin Expanse and the Great Black Music Ensemble.

In the late 1990s, Mitchell started teaching at the Chicago area institutions. As an educator, she has contributed a lot in the field of composition, jazz and creative music. Mitchell has also done workshops and residencies at University of Guelph (Canada), University of Louisville, Dartmouth College, Howard University, Amherst College, South Suburban College of Illinois, and University of Michigan: Ann Arbor. She directed a large ensemble of talented high school musicians as a resident artist for the Vancouver Jazz Festival from 2006-2010. She is currently a Professor of Music at the University of California, Irvine.

Nicole’s net value is not disclosed yet, but it is around $100 thousand.