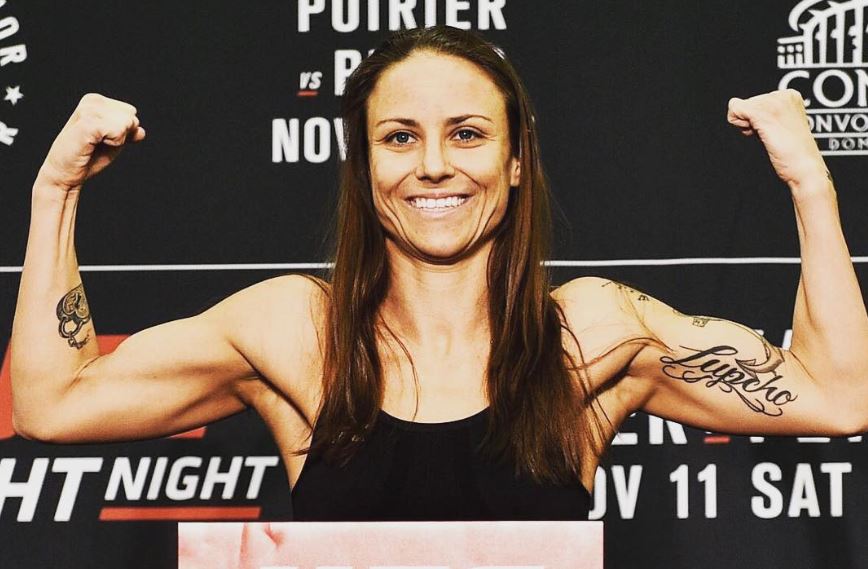 Macedonian-American mixed martial artist Nina Ansaroff competes in the women’s strawweight division of the UFC. She is ranked in number three in the strawweight rankings as of May 2019. It has been over four years since she made her UFC debut on November 8, 2014, at UFC Fight Night 56.

Nina is openly a lesbian, and she is engaged to fellow UFC fighter Amanda Nunes. Her partner is a reigning UFC Women’s Bantamweight and the Featherweight champion. Since 2012, they have been in a relationship after they met as training partners at the American Top Team gym in Florida.

Nina got engaged to her partner, Amanda, in August of 2018. The two announced their engagement via their respective Instagram accounts. They became more open about their relationship after Nunes’ big win at UFC 200.

Nina made her UFC debut against Juliana Lima on 8 November 2014 at UFC Fight Night 56. She lost the battle to Lima through a unanimous decision. She was expected to face Rose Namajunas on 23 May 2015 at UFC 187 but missed the weight on her first attempt at the weigh-ins. After having made no attempts further, Nina was fined 20 percent of her fight purse, which went to Rose Namajunas.

Nina won the fight in the third round against Jocelyn Jones-Lybarger at UFC Fight Night: Rodriquez vs. Penn on 15 January 2017. She even faced Angela Hill and won the battle through a unanimous decision. She faced Randa Markos on 28 July 2018 at UFC on Fox: Alvarez vs. Poirier 2 and won the fight by consistent decision.

Nina faced Tatiana Suarez on 8 June 2019 at UFC 238 but lost the fight through a unanimous decision.

Her net worth dwells around $250 Thousand.

Nina Ansaroff was born in Weston, Florida on 3 December 1985, which makes her age 31. She has an elder brother, Dewick Ansaroff. She hasn’t disclosed details about her parents. However, she has shared a couple of her father, Louie’s picture on her social media accounts.

In Florida, she attended the Lake Region High School. She was passionate about wrestling and Taekwondo from a very young age. In 2009, she started studying mixed martial arts.

Nina has a decent height of 5 feet 5 inches. She weighs about 52 kg.