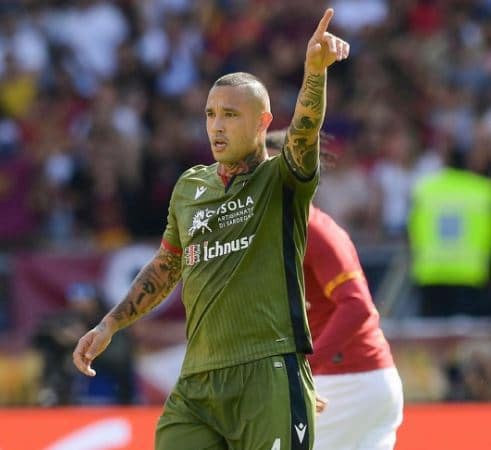 Radja Nainggolan is a famous Belgian footballer from Inter Milan. However, his transfer to Cagliari has grabbed colossal attention, and many are on questioning what to expect from him on the coming days. He captains the team and plays as a midfielder. Furthermore, Radja has been named four consecutive times in the Serie A Team of the Year and is a Belgian international for eight years. He has played 30 times for his country and also represented it at Euro 2016.

Radja played his debut game with Piacenza against Arezzo in 2006. After winning the match, Radja was selected as a permanent member. Likewise, he became the starter for Emilia-Romagna in the 2008-2009 season. In 2016, he signed a contract with Inter Milan worth $15.74 million. He joined Cagliari on loan from Inter Milan in 2020.

The football star, Radja, earns a hefty salary of $6.74 million from his contract with Inter Milan. Besides, the player also makes additional income from endorsements from brands and companies. He is endorsed by Nike, a brand known for paying a huge sum to athletes. However, Radja’s net worth is still under review, but we will be sure to update on the subject on the coming days.

Radja is married to his beautiful wife, Claudia Lai. The couple had tied the knot in 2011 and has been together ever since. Likewise, Radja’s wife is the daughter of Carabinieri Manager and is originally from Sardinia’s capital city of Cagliari. Likewise, the couple also shares two children; Aysha and Mailey.

Unfortunately, the Radja was struck with bad news when he came to know that his wife was diagnosed with cancer. Her wife announced that she would be going chemotherapy for battling cancer. Moreover, Radja shared that she was going a rough time from the thought of having to go chemotherapy. Radja and his wife, together, will battle against cancer in the coming days.

Radja was born in 1988 in Antwerp, Belgium. He celebrates his birthday in 1988, which makes his age 31. Likewise, he was raised by his parents, Lizy Bogaerts and Marianus Nainggolan. Moreover, he was raised alongside three half-brothers and a twin sister. His sister, Riana Nainggolan, also plays football. Radja’s mother passed away in 2010, and he tattooed two large wings on his back with the dates of her birth and death.

His interest on football started at age five and moved to the youth team of Germinal Beerschot until 2005. He holds Belgian nationality and comes from mixed ethnicity, including Flemish and Batak. Radja has a height of 5 feet and 9 inches.