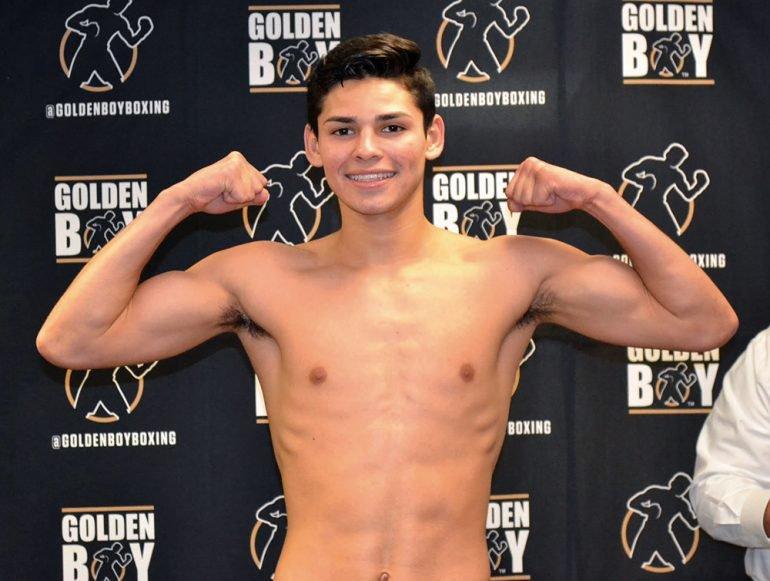 Ryan Garcia is an American professional boxer who competes in the Super Featherweight Division. Known as Kingry, he is a 15-time national amateur champion boxer and is famous for his affiliation with Golden Boy Promotions. So far, he remains unbeaten since his boxing debut in the year 2016. He is undeniably the future of boxing.

Dating a Girlfriend or Is He Single?

Ryan has become a big deal in the boxing world. His shirtless pictures on Instagram have earned him 1.9 million followers. Besides, his consistent and continuous victory inside the ring have amazed many girls who would happily be his girlfriend.

Last year in March, the 20-year-old handsome boxer asked his fans if they would want to know his girlfriend’s name via his Twitter account. However, the tweet was merely a joke where he mentioned himself “Boxing Garcia” as his girlfriend. All he wanted to say was that he loved himself and had no time for a girlfriend.

I do have a girlfriend wanna know her name….

However, Ryan has a crush on American singer, Selena Gomez. In an interview with TMZ, he said he would like to date Gomez and admires her whole-heartedly. He gushed:

“She’s single so lemme shoot my shot.” “Lemme take you out!”

He even pitched for Gomez, saying:

However, Gomez might not be interested in Ryan as she is looking forward to focusing on her career at present since leaving treatment. She recently teamed up with PUMA to release the fantastic sneakers.

As for now, Ryan is single. Hopefully, he will find the love of his life soon.

Ryan made his boxing debut on 9th June 2016 in a fight against Edgar Meza held at Tijuana, Baja, California. He won the bout in the first round following a TKO. During his career as an amateur, he had a 215-15 boxing record. He came first in the National Pals, Silver Gloves, Junior Olympics, and Junior Golden Gloves.

In 2016, the Golden Boy Promotions signed him under the management of Oscar De La Hoya. Next year, he won the NABF Junior super-featherweight title.

On 4th May of 2018, Ryan won both the NABO and NABF super-featherweight titles. He fought with Carlos Morales, 29, at Fantasy Springs Resort Casino on 1st September 2018 and stood victorious after the 10th round.

He has a lot to work on to fulfill his dream of being an Olympian and remain undefeated. Nevertheless, his boxing endeavor has helped him to earn a considerable amount of money. According to ESPN, he is making $25,000 which is half of what Velez is making. His net worth dwells around $200 thousand.

Ryan Garcia was born on 8 August 1998 in Victorville, California, making his age 20. He is the son of Henry and Lisa Garcia. His father, Henry, once had a dream of being a boxer but decided otherwise and became a trainer instead. He began training Ryan when he was only seven. Henry also taught his younger son, Sean Garcia, and Ryan’s best friend, Lawrence The Dawg King.

For a long time, Ryan trained with his father, brother, friend, and uncle. He grew up with other four younger siblings – Demi, Sasha, Octavia, and Kayla. Ryan and his brother, Sean, enjoyed the support from their parents.

Though Ryan is American by birth and nationality, he has Mexican heritage. He carries the US and Mexican flags into the ring. He currently resides in Los Angeles. He has a tall, rangy height of 5 feet 11 inches.