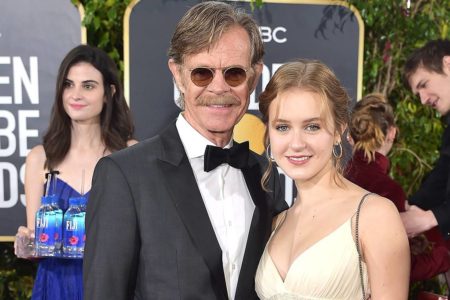 Sophia Grace Macy is a young American actress known for her role in the movies like Aurora and The Layover. She is better recognized as the eldest daughter of Felicity Huffman and William H. Macy. Recently, her mother has been charged with a college cheating scandal.

Sophia Grace Macy is a teenage actress who is widely famous as the daughter of Felicity Huffman and William H. Macy. She has carved her name in the Hollywood industry with her pure talent by working on movies like The Layover and Aurora in 2017.

For now, Sophia’s net worth is unknown to media outlets. Nevertheless, her parents are millionaires with a combined net worth of about $65 Million. Her mother, Felicity has a total net worth of $20 Million whereas her father, William has a net worth of $45 Million.

The 18-year-old actress, Sophia has kept her dating life low-key. She hasn’t revealed her boyfriend to the public yet. Her parents have approved her to enjoy every single bit of her quality time. In an interview with US Weekly, her father said:

“I want them to be happy and lusty and safe. I want them to have a lot of sex in their lifetime! Good, healthy wonderful sex with no guilt. That’s what I really want.”

It’s pretty bizarre, especially with Sophia, to wake up in the morning and there’s some boy walking out of your daughter’s room! They all sleep together! I don’t think they have sex, well, I know they don’t.”

On Sophia’s prom night, Felicity shared a post about her husband taking their daughter to prom night as a date in April 2018. Most likely, Sophia has a secret boyfriend, but she has decidedly kept him behind the scenes.

Sophia Grace Macy was born in the city of Los Angeles, California, United States on 1st August 2000. She was born to star parents – Felicity Huffman and William H. Macy. Her mother is an actress known for her roles on the ABC TV series Desperate Housewives. Her father is an actor who appeared in Shameless and Fargo. She has a sister named Georgia Grace Macy, born on 14 March 2002. She went to Los Angeles High School of the Arts.

Sophia has a decent height of 5 feet 3 inches. She has a pretty face with blue eyes and blond hair.