Sue Aikens, formerly Susan Aikens was born on 1st of July in 1963. Her birthplace is Chicago, but she had to migrate to Alaska with her mom. She became world famous when she signed up for the show named ‘Life below Zero,’ aired on National Geographic channel. To know her more, let’s dive into this pool of article which includes her facts, net worth, personal information and more.

Sue Aikens – 6 Facts You May Not Know 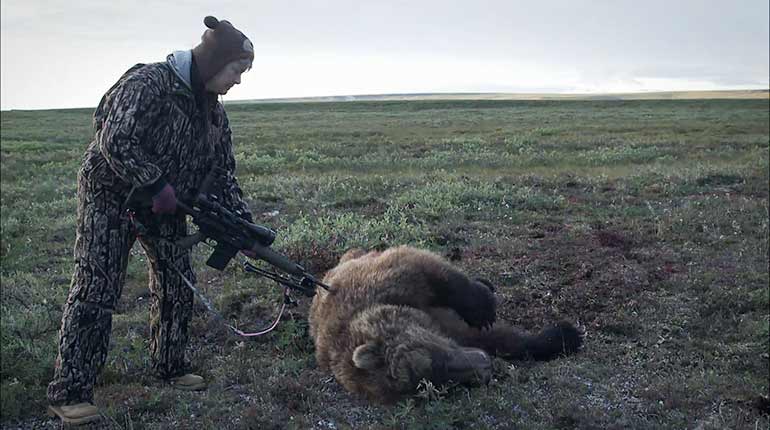 Caption: Sue Aikens killed a bear which attacked her while pumping.

Susan’s most of the earnings are from her shows. The most paying show is Life below Zero which took her to the height. As she owns her Camp in Arctic National Wildlife Refuge, her earning surely is in an impressive number.

The income from her Camp is sole $4500 a week. And her annual salary is $150 thousand in average. So, her total net value as of now is $500 thousand which includes her Camp, income and residence.

She has three children, and all are married already. Sue already has grandkids, and she goes to visit them regularly during summer break.

Aikens also has a son, of whose information came out just a year ago. We got to know her son when she posted a picture on Twitter. She shared the info that her son finally got married to his girlfriend.

I slipped the collar last week to see my Son wed his girl. Congrats to them both, yay!! You cant take the Idgie out of this tomato 🙂 pic.twitter.com/F67UsHq2BU

Who is Sue Aikens?

Sue Aikens’ full name is Susan Aikens, and she is from Alaska. Her birth date is 1st July 1963, and she is 54 years of age. The reason she always works hard are the challenges she had to go through in the very kindling age of 12.

Her works include being TV cast in Life Below Zero, Flying Wild Alaska and more. She is the best example for people who can live demolishing fear.