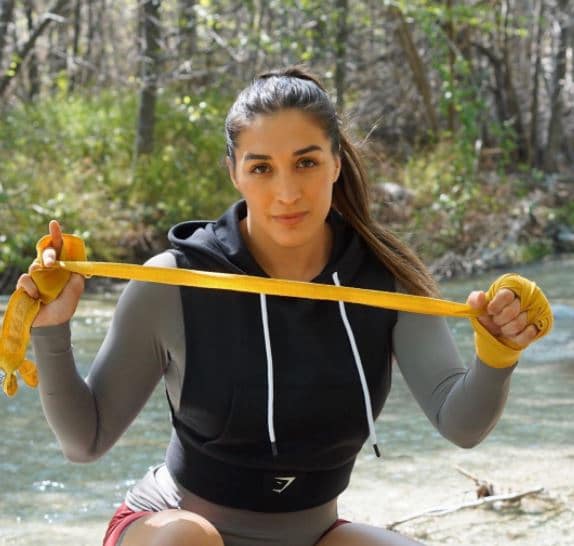 Tatiana Suarez is the dominant fighter from UFC who is famous for her aggression, vicious ground game, and relentless pressure. Dubbed as the Ladies Khabib, she has not lost one match to date and has to fight on her blood. Starting to wrestle at a young age, she has been a feared opponent on the UFC. She is he strawweight tournament winner in the 23rd season of The UFC and #3 in the UFC strawweight rankings.

Learn more on Tatian Suarez and get to know her life outside the cages of the UFC.

Tatiana had started her MMA training in 2013 and made her Amateur debut in February 2014. SHe made her successful professional MMA debut in July 2014 and made her final appearance for the promotion in August 2015, defeating Arline Coban by TKO in the second round.

After MMA, Tatiana was chosen as a participant on the 23rd season, The Ultimate Fighter. She faced Team Claudia teammate Amanda Cooper in the finals on July 8, 2016, at The Ultimate Fighter 23 Finale. She won the fight in the first round to become the strawweight tournament winner. Tatiana was expected to face Juliana Lima at UFC Fight Night: Lewis vs. Abdurakhimov on December 9, 2016. However, she pulled out of the fight on November 23, citing injury and was replaced by JJ Aldrich.

She met Alexa Grasso on May 19, 2018, at UFC Fight Night 129 and won the match via a rear-naked choke in round one. She faced Nina Ansaroff on June 8, 2019, at UFC 238 and won the fight by unanimous decision. With all those hard work and dedication, she has earned a considerable amount of money. However, Tatiana Suarez’s net worth is expected to be in six-digit numbers. As of 2020, Tatiana Suarez’s net worth is under review.

Tatiana has remained very private on her personal life, and many people are unaware that the UFC fighter is infact dating and has a boyfriend. Tatiana is dating an MMA fighter named Christopher Sykes. She and her boyfriend share the same love for fighting. While Tatiana has not shared many pictures with her boyfriend, Christopher has wished her birthday on his Instagram and has also shared her picture a few times.

Moreover, in an interview, Tatiana shared that she and her boyfriend trained together. But, the couple were banned from teaching together due to their competitive nature.

“For a long time we weren’t allowed to drill or spar. We get mad at each other. It’s not cute.”

Nonetheless, Tatiana and her boyfriend’s competitive nature seems to fade away when they are outside the ring as they are busy loving each other.

Tatiana Suarez was born in 1990 in California, USA. Her birthday falls on December 19, which makes her age 29 as of 2020. She has not shared information regarding her parents. However, she has two brothers, Chris and Ricky, and a sister Julia, who all are wrestlers. Tatiana graduated from Northview High School.

In 2012, Tatiana was diagnosed with a cancerous growth on her thyroid for which she underwent radiation therapy and had her thyroid and several lymph nodes removed. She holds an American nationality and comes from Hispanic descent. The fighter has a height of 5 feet and 5 inches and weighs around 52 kg.