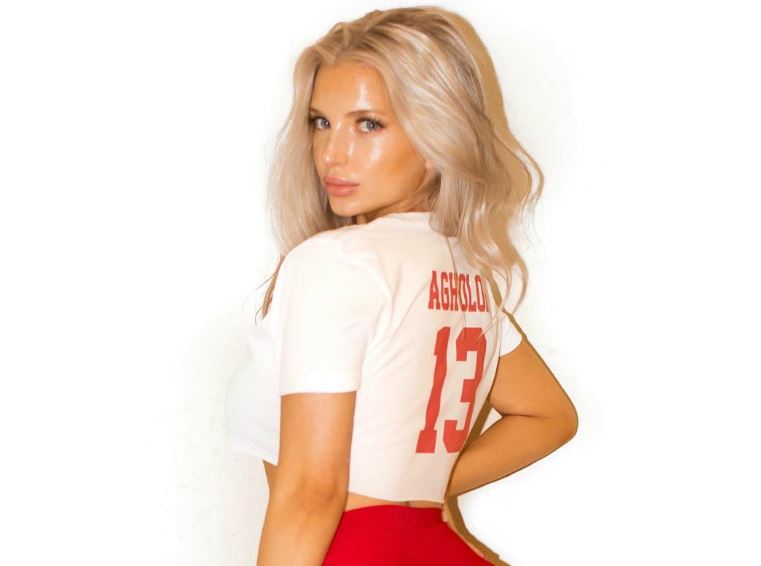 Viviana Volpicelli is an American model and a beauty blogger from Los Angeles. She has an active Instagram page and her own blog where she talks about makeup, skincare, body care, and more. She rose to fame after she began dating Eagles wide receiver, Nelson Agholor, publicly in October 2017. Here is more about Nelson Agholor girlfriend!

Viviana is a reality television star as she starred in The Real Housewives of Footballers. She is a beauty blogger, a model, and a social media influencer who has her website, vivianavolpicelli.com. She writes and shares advice on fashion, makeup, skincare, and more on her blog. Usually, she promotes products of Gucci, Barney’s New York, Chanel, Adidas, Louis Vuitton, and Kim Kardashian West.

Viviana has over 119k followers on her Instagram, where she flaunts her lavish lifestyle, endorses commercial products, and uploads modeling shoots. Her net worth dwells around $750 Thousand.

Viviana is currently dating Eagles wide receiver, Nelson Agholor. She made her relationship with Agholor public via her Instagram account in October 2017. But they first met at the University of Southern California.

Though Viviana began dating her now-boyfriend publicly in 2017, the two were supposedly dating each other since their University days. She often uploads pictures of her where she can be seen wearing Nelson’s jersey.

During Super Bowl LII, Viviana showed up at the game to support and cheer for her boyfriend. She celebrated with her boyfriend after his team won the match. Though she is most likely to be Nelson’s wife, neither of them has gushed about their plans on getting married.

Viviana Volpicelli was born on May 9, 1995, in Southern California, making her current age 23. She was born to an Italian family to parents – Dr. Anton Volpicelli, the physician of the U.S. Healthworks Medical Center, and Diana Volpicelli, manager of the real estate. She attended Palos Verdes High School and graduated from the University of Southern California with a science degree. Later, she studied at the USC’s Sol Price School of Public Policy where she majored in real estate development and graduated in 2017.

Viviana has a decent height of 5 feet 5 inches. Her hair color is blond, and she has blue eyes.