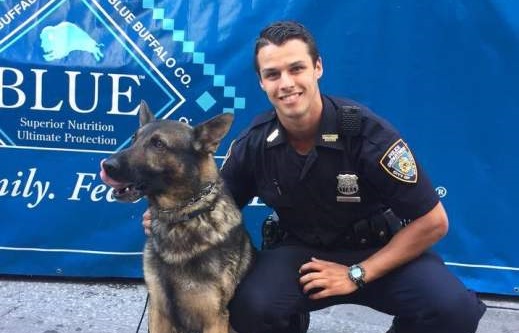 Brendan McLoughlin is an NYPD police officer from Staten Island and a former model. He gained public recognition after he secretly married the famous country music singer, Miranda Lambert. Besides, he is a new dad who welcomed a child from his previous relationship in November of 2018. Miranda is too happy about marrying her short time boyfriend and is still head over heels for him without any regrets.

Brendan works as an NYPD police officer in Staten Island. As per Paysa, the salary of the police officer in Staten Island, New York, is 68,261 dollar per year. Previously, he even worked as a K-9 officer. In 2015, he won first place for NYPD in Keith Ferguson Memorial 5k Brooklyn Bridge Run!. Back in 2011, he even worked as a model and had created a profile on Model Mayhem.

His new wife, Miranda has a net worth of $45 Million. But his net worth is unknown.

Brendan is a new and second husband of the famous country music singer, Miranda Lambert. They tied the knot in Davidson County, Tennessee in an intimate wedding ceremony on 26th January 2019.

On Valentine’s Day, his wife, Miranda, took to Instagram to share her special day and thanked Brendan for loving her with all his heart and soul. The couple dated for only two months and gave their love life a new direction after announcing each other as “husband and wife.” Currently, the happily married lovebirds relish their life with immense love, care, and harness for the new start of their family life.

Miranda was previously married to Blake Shelton in 2011. But they dissolved their relationship in 2015. Meanwhile, Brendan became a father in November 2018 when his ex-girlfriend, Kaihla Rettinger gave birth to a baby boy.

Brendan Mcloughlin was born in the year 1991 in the United States. He was born to parents – James McLoughlin and Inova Valerio McLoughlin. He has a brother named, Patrick, and a sister, Jocelyn. His mother is a retired NYPD detective. So, he followed his mother’s footsteps into law enforcement. He graduated from Monsignor Farrell High School in 2009.

Brendan tried his hand in modeling before becoming an NYPD cop. He is about 28 years old, and he has a tall height of 5 feet 11 inches.