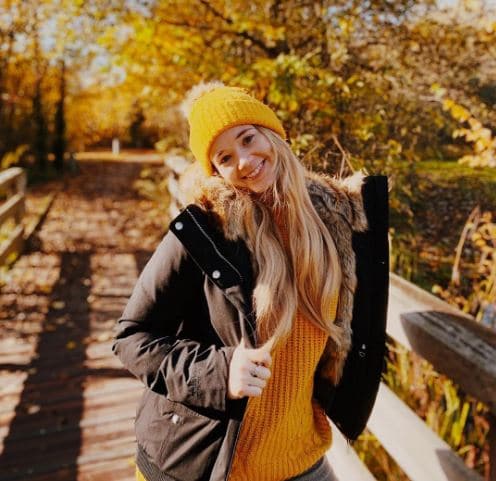 Daisy Wood is famous not only as an actress but also as a singer who has appeared in numerous stage productions as Laura and Janet Weiss. Likewise, the actress is also popular for appearing in the series, Hollyoaks and Holby City. She is a marvelous actress, and her love life also made headlines after she became engaged to her co-star. Learn more on Daisy Wood and her personal life, net worth, wiki-bio, and much more.

Daisy started her career after the auditioning for Bill Kenwright’s production of Dreamboats and Petticoats. She earned a lead role as Laura from her marvelous audition. She also toured with the production and was featured on a cast album that sold over 60k copies. Later, she signed a record deal with Universal Music and also played Janet Weiss in the European tour of the musical The Rocky Horror Show.

Likewise, in 2012, she appeared in an episode of BBC soap opera EastEnders as tansy Meadow and as Tansy in a 15-minute spin-off episode called, “All I Want for Christmas.” From 2014-2018, Daisy appeared as Kim Butterfield in Hollyoaks. In 2019, the actress played the role of Sheila in Hair the Musical, and she announced that she would be playing the role of singer-songwriter Carole King in the UK and Ireland touring production of Beautiful: The Carole King Musical in 2020. As of 2020, Daisy Wood holds a net worth of $1.5 million.

Daisy engaged to her boyfriend, Luke Jerdy, and the couple announced their engagement on August 2019. Likewise, Daisy and her Fiancé had been dating since 2016 after meeting at the set of Hollyoaks set and quickly becoming inseparable. Also, daisy could not stop announcing the news and showing off her gorgeous ring after getting proposed on their vacation to Greece. She posted a picture near her fiancé, showing off her ring which was designed by her partner, with a caption,

“On Thursday evening @lukejerdy asked me to marry him by the beach in front of my family. I’ve never felt a happiness like this. It’s so surreal but nothing has ever felt more natural. I can’t wait to marry my best friend and celebrate how lucky we are to have found what we have.”

Likewise, her fiancé is also an actor like her, and the couple is co-stars in Hollyoaks where Daisy plays Kim Butterfield, and Luke played Jesse Donovan. Besides, Daisy has been very open on her relationship and has shared numerous pictures with her fiancé. However, we are still waiting for them to tie the knot soon.

Daisy Wood-Davis was born in 1990 in Bromley, Greater London, England. She celebrates her birthday on 22nd October, which makes her age 29. She was raised by her father, Sean Davis, and mother, Sara Wood Davis. Likewise, she also has a sister named Isabella Wood Davis. She attended Crofton School and Darrick Wood School before training at the Italia Conti Academy of Theatre Arts.

She holds a British nationality and comes from White ethnicity. Daisy has a height of 5 feet and 4 inches and weighs around 56 kg.