In a dating fiasco, Leonard, from the Big Bang Theory, also dated Leslie Winkle. The character was played by Sara Gilbert, and did you know the actors for the two characters were also real-life dating partners. Sara gilbert is probably famous for appearing in the 90’s show Roseanne. Besides, she has also received two Primetime Emmy Award nominations and is the creator and former co-host of the CBS daytime talk show The Talk.

Sara Gilbert made herself recognized after being cast for the show, Roseanne, in 1988 as Darlene Conner-Healy. Later she appeared on series such as Sudie and Simpson, Welcome to New York, Rugrats, Will & Grace, Twins, and The Class. Likewise, she earned her other notable role in The Big Bang Theory as Leslie Winkle. In 219, she appeared in the show, Weird City and Atypical. 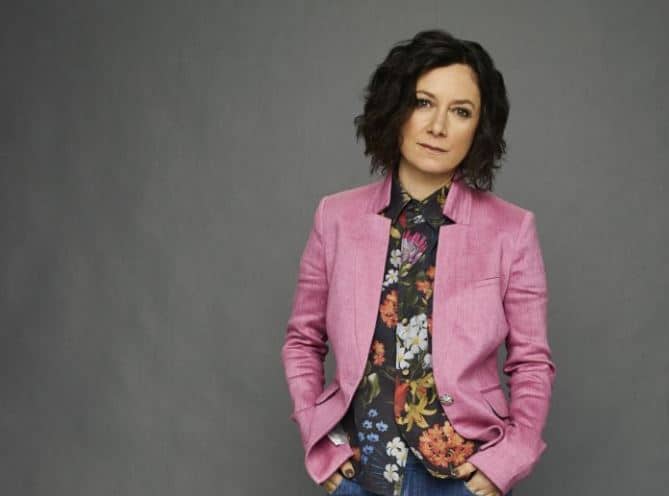 Likewise, she also appeared in films making her big-screen debut in 1992 with the movie, Poison Ivy. She has appeared in a few films like Light it Up, The Big Tease, Boys Life 3, and Laws of Attraction. As of 2020, Sara Gilbert holds a net worth of $35 million.

Sara is a recent divorcee with her ex-wife, Linda Perry. Linda is best known as a songwriter, music producer, and former 4 Non-Blondes frontwoman. Sara and Linda announced their engagement in April 2013, and they tied the knot on March 30, 2014. Likewise, Sara mothered a son, Rhodes Emilio Gilbert Perry, on February 28, 2015. After more than six years of togetherness, Sara announced that she would be splitting up with her wife after filing for a legal separation from Linda Perry.

During her teenage years, she dated her Big Band Theory co-star, Johnny Galecki. She realized she was lesbian during the relationship and had to discontinue the relationship. Moreover, she later dated Ali Alder with she shares two children, a son, Levi Hank, and a daughter, Sawyer Jane. Likewise, she only opened up about her sexuality in July 2010 on her talk show, The Talk. She later separated from Ali on August 2011. Also, she is not dating anyone for now and is single.

Born in 1975, Sara Rebecca Abeles hails from Santa Monica, California. She celebrates her birthday on January 29, which makes her age 45. She was raised by her mother, Barbara Cowan, and father, Harold Abeles. Likewise, she has four-half siblings. Melissa Gilbert and Jonathan Gilbert from her mother’s side and Patrice and brother Joseph from her father’s side. She graduated in 1977 from Yale University with honors, majoring in art with an emphasis on photography.

Likewise, the actor holds an American nationality and comes from Jewish ethnicity.