Erykah is a queen in the genre of neo-soul and is one of the popular American singers from the genre. She came into popularity since 1991 after releasing her first debut album and has been making hit ever since she has won 16 awards and earned more than 55 nominations till date. Besides, she has also expanded her career as an actress appearing in few movies and TV shows.

Erykah has made most of her earnings through her music career and acting roles in movies and television shows. She has released five studio albums over the years, including her debut Baduizm. She has won awards such as BET and Grammy Awards through her music career. She is also referred to as the First lady of Neo-Soul or Queen of Neo-Soul, as she is the core member of the Soulquarians. 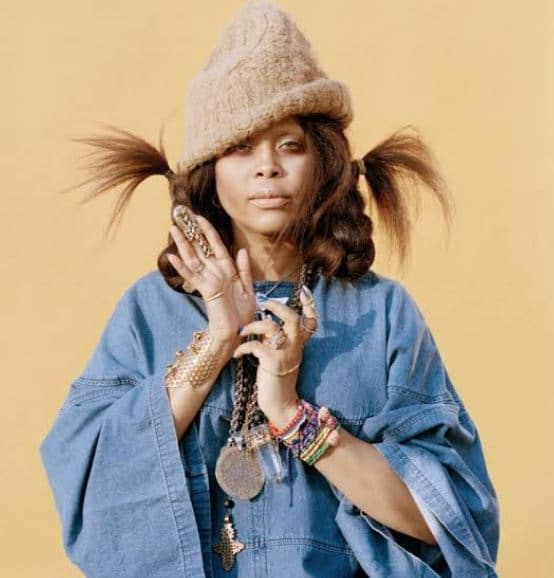 Besides, she also has made numerous appearances on movies like Brothers, The Cider House Rules, and House of D, among others. IN 2016, she appeared on the film The Land and What Men Want in 2019.  She also plays a role in the documentaries like Before the Music Dies and the Black Power Mixtape 1967-1975. As of 2020, the singer holds a net worth of $12 million.

Erykah’s dating life first made headlines when she was involved with the rapper André 3000 from OutKast. Likewise, she also mothered her first child, a son named Seven Sirius Benjamin, on November 18, 1997. However, they split in 1999. Later, she gave birth to a daughter, Puma Sabti Curry, with West Coast Rapper The D.O.C. Likewise, she introduced her third child, Mars Merkaba Thedford, with her boyfriend of five years, Jay Electronica.

The singer was also dating Carl Jones from 2013-2018. Likewise, she was also linked with Ishmael Butler; however, she had not confirmed her relationship. She has been private and has not announced her love to anyone. Besides, we assume her to be single unless she speaks more on the subject.

Erica Abi Wright was born in 1971 in Dallas, Texas. She celebrates her birthday on February 26, which makes her age 49. Her mother, Kolleen Maria Gipson, raised her along with her brother Eevin and sister Nayrok after her father, William Wright Jr., separated from the family. The singer had her first taste on the show of business at age four.

She is a graduate from Booker T. Washington High School for the Performing and Visual Arts and attended Grambling State University before leaving to focus on her music full-time. Erykah Badu holds an American nationality and comes from African-American ethnicity.