Joy Allison Taylor, who is professionally known as Joy Taylor, is an American radio personality and television host for Fox Sports 1. She is currently working as the news update anchor on The Herd with Colin Cowherd.

After graduation with a Bachelor of Arts Degree in Broadcast Communications from Barry University, she began working as a host of the radio show The Noise. She also served as the manager for Barry University’s radio station WBRY 1640 AM.

Joy worked at 790 AM The Ticket for around three years, where she started working as an executive producer. She later eventually became the co-host for the station’s famous sports radio show, Zaslow and Joy Show.

Joy even has worked as the host of Fantasy Football Today and Thursday Night Live. It was back in March 2016 when she joined FOX Sports and is now widely known for several different FS1 roles.

Joy has appeared and worked for several shows like The Herd with Colin Cowherd, Skip and Shannon: Undisputed, The Hang, and many others.

Working in the field for a long time, Joy has earned a high figure of salary. As of early 2020, Joy Taylor’s net worth is estimated to be around $1 million and receives an annual salary of $300 thousand.

Joy’s brother Jason Taylor’s net worth is $25 million that he collected from being a successful football player.

The salary of the New Reporter in FOX news ranges between $69,842 to $78,082. Joy might be receiving a higher figure of the salary than reported as based on her popularity and experience.

While talking about Joy Taylor’s personal life and current relationship status, she was once a married woman but now is engaged and fiancée to Earl Watson. She was supposed to be living a blissful married life with her boyfriend turned husband, Richard Giannotti. 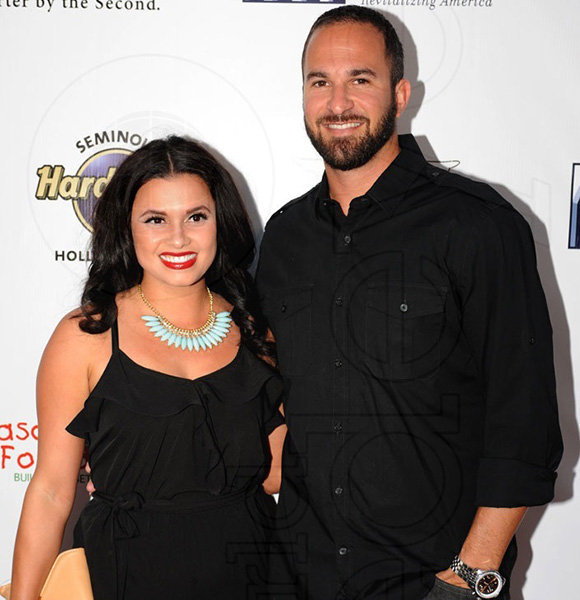 Her husband Richard is the President of the Sports and Entertainment at Global Wealth Management, who is also a former baseball player. He had played for several MLB clubs.

To begin, Joy and Richard met each other in one of the conferences. It won’t be wrong to claim that Richard and Joy fell in love at first sight.

Just after dating for around a year decided to take their relationship to the next level. Joy Taylor married boyfriend turned husband Richard Giannotti on February 13, 2016, just a day before Valentine’s Day.

Though they looked happy together on the camera, things were different in real life. Their relationship got dissolved, and the pair got divorced just a few years after being married.

Now, after divorcing the first husband, Joy is engaged to Earl Watson, who is a former NBA player and coach. The pair got engaged on September 17, 2018. The duo now lives a lavish lifestyle together in Encino worth $2.75 million.

For now, Joy and Earl are enjoying a time of their life. They are leading a healthy relationship. However, they are yet to reveal the plans of marriage.

Joy Taylor was born Joy Allison Taylor on January 17, 1987, and is currently 33 years old. She was born in Pittsburgh, Pennsylvania, in the United States of America. She is of American nationality and belongs to African-American ethnicity.

Joy graduated with a Bachelor of Arts Degree in Broadcast Communications in the year 2009 from Barry University.

Joy stands at the height of 5 feet 6 inches and weighs around 59 kg. She has a pear-shaped body build that measures 37-27-38 inches. She has black eyes and black hair color.